This fillling and hearty Loaded Baked Potato Soup is packed with all your favorite potato toppings. Incredibly creamy and done in about 30 minutes.

I know the weather is getting warmer but I will stretch soup season out as long as I can. Mainly because of this loaded baked potato soup recipe.

It is officially my favorite potato soup of all time. And I’m kind of a potato soup connoisseur. My midwestern roots run deep in the soup department.

That’s what you get with this recipe and it’s going to change your winter food game.

How to Make Baked Potato Soup

This soup is simple to make and done in about 30 minutes, making it a great weeknight meal. Double the batch to enjoy it for days.

Start by heating a large stock pot or dutch oven over medium heat. While the pot is heating, cut the bacon into small pieces.

Add bacon to the hot pot and cook until crisp. Remove from the pot to a paper towel lined plate. Leave that delicious bacon grease in the pot.

Add flour to the butter and bacon grease mixture. Whisk and cook for 1 minute, to cook out the raw flour taste.

Add garlic, chicken stock, half and half, diced potatoes and three-fourths of the bacon. Bring to a simmer then lower heat to medium-low.

Cook for 15 to 20 minutes, until the potatoes are fork tender and the soup has thickened.

Turn off the heat and stir in the sour cream and 2 cups of shredded sharp cheddar.

Make sure to watch the video I created for visual step by step instructions.

How to Serve Loaded Potato Soup

Ladle into bowls and top with extra bacon and shredded sharp cheddar. Sprinkle with chives if desired.

If you need another carb hit, easy french bread is glorious when dunked into this soup.

Listen, I don’t love leftovers. I’ll eat them in order not to waste any food but they just aren’t my favorite. But this baked potato soup?!

It’s just as good the next day. Maybe even better. It stays rich and creamy and has even more bacony flavor. 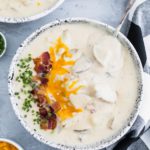