This simple Cinnamon Roll Casserole has all the decadent flavors of cinnamon rolls without all the effort. A delicious option for your holiday celebrations.

I love a warm, gooey homemade cinnamon roll. But sometimes I just don’t have the time (or desire) to make them from scratch. In comes this cinnamon roll casserole.

It’s easy to make with store-bought canned cinnamon rolls and a few other ingredients that combine to make this a baked french toast cinnamon roll mash up that the whole family will love.

I love this as an option for breakfast or brunch. I know cinnamon rolls are popular for Christmas morning so this is especially perfect option for your holiday brunch.

The ingredient list for this breakfast casserole is pretty simple. Here’s what you are going to need:

How to Make Cinnamon Roll Casserole

Remove the cinnamon rolls from the packaging. Place on a cutting board and cut each one into fourths. Add to a greased 13×9 baking dish.

Whisk together the eggs, heavy cream, vanilla and cinnamon well. Pour over the cut cinnamon rolls.

Sprinkle with chopped pecans if desired then bake.

Can I Make This the Night Before?

This cinnamon roll casserole can definitely be made the night before. Prep the casserole and before baking, cover in plastic wrap or aluminum foil.

Refrigerate overnight. Grab the casserole out of the fridge and let it sit on the counter while the oven preheats. Bake according to directions. You may need to add a few extra minutes to the baking time since it will be colder from refrigeration.

What to Serve with Cinnamon Roll Casserole

This casserole is deliciously sweet so if you want to add something savory and salty to your plate, some baked bacon would be a great option. You could also go with turkey sausage patties.

I also love these breakfast potatoes for a savory side to this casserole.

Honey lime fruit salad is a great, fresh option that brings even more sweetness to your brunch.

I think this is great just the way it is but there are some additions you can throw it to jazz it up.

If you want to get festive, you can add some holiday sprinkles to the casserole before baking.

You could also add chopped walnuts or slivered almonds to the top instead of pecans.

If you want an extra dose of sweetness, drizzle portions with maple syrup before serving.

How do I store this casserole? Store covered in the refrigerator. It will last for up to 4 days.

How do I reheat? Microwave a portion for 20 to 30 seconds. If you want to reheat the whole casserole, place in a 350 degree oven for about 10 minutes. 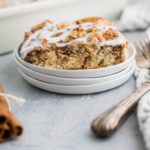