Drop everything right now and whip up a refreshing Citrus Arnold Palmer. So light and refreshing on a hot summer day.

Hello my lovelies. Summertime has officially arrived and it is hot. That means we need some cool, refreshing beverage options to get us through the heat.

Before we get to far into this, can I admit something? I’ve never been a big fan of an Arnold Palmer. I’m not an iced tea person so they just aren’t my favorite. Until now.

I infused some major citrus flavor into the tea before mixing it with lemonade and it is a total game changer.

The first flavor boost is from using an orange flavored tea (I used this Tazo Wild Sweet Orange Tea). Next is brewing it with some orange slices. Guys, the hit of orange you get is just so so good.

I decided to make the tea in my instant pot for two reason. First, I’ve seen the idea floating around the internet and wanted to try making a beverage in the IP. Second, it’s quick and I can set it and let it do its thing.

If you don’t have an Instant Pot or pressure cooker, no worries because I’ve included instructions in the recipe that don’t require the use of an Instant Pot. Basically, you just brew tea as you would but with the addition of orange slices. Easy peasy.

Once the sweet orange tea is brewed, allow it to cool. Once the tea is cooled it’s lemonade time. I went the store-bought route with the lemonade because it’s summer and we don’t have time for that when there’s a pool to be swimming in.

Between the lemonade and the orange spiked tea, these are the most refreshing drink I’ve made in a long time. And remember that’s coming from someone who doesn’t even like the Arnold Palmer.

But I guess I can now officially say I’m a convert. A pitcher of these will live in my refrigerator all summa long. 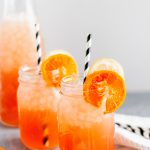