Skip the restaurant and make your own Chick-fil-A Macaroni and Cheese at home with this copycat recipe. Tastes just like the real thing.

Time and time again, my most popular recipes are the restaurant copycats. You all love a make at home version of a popular recipe and I do too.

And it felt about time to create one of my kids favorites at the moment, Chick-fil-A macaroni and cheese.

When we tried it at the restaurant for the first time I was shocked at how good it was. I just didn’t expect that for fast food.

But now we don’t have to go out because this homemade version is just as good (if not better) and makes a big batch for all the leftovers. You’re going to love this one.

Ingredients for Chick-fil-A Macaroni and Cheese

After some research and testing I found the perfect combination of ingredients to make the most delicious mac and cheese that tastes just like Chick-fil-A’s.

Here’s what you need to grab at the store:

You’re going to need the cheese in two different forms, shredded and cubed.

Wondering why we need some cubed? When you order at Chick-fil-A there are gooey, melty bits throughout the mac and cheese and that’s part of what makes it so dang good. So we’re going to cut tiny cubes to get the same results.

It’s also important to buy your cheese in a block and shred it yourself. I know it can be annoying sometimes and adds time to your prep but it melts SO much better than the pre-shredded stuff.

First, get the water boiling for the pasta. While it’s cooking, make the cheese sauce.

Add butter to a large saucepan over medium heat and allow it to melt. Once melted whisk in the flour and salt. Cook for one minute, whisking the whole time, until it turns a little bit golden. This cooks out the flour taste. And now you have your roux.

Add half the milk and whisk until smooth. Continue cooking until it thickens slightly, enough to coat the back of a spoon.

Add remaining milk and whisk in, cooking until thickened again. Lower the heat and add two cups of shredded cheddar cheese, parmesan and romano. Whisk until everything is melted and smooth.

Tear the American cheese into pieces and stir in until smooth.

Assemble the Chick-fil-A Macaroni and Cheese

Add the cooked pasta to a 13×9 baking dish. Pour the cheese sauce over the pasta and stir until well coated. Add small chunks of cheddar and mix them in.

Sprinkle with remaining cheddar on top and under the broiler it goes until it’s nice and melty. Chick-fil-A doesn’t get theirs crispy, just melted so keep a close eye on it.

Although this is a little bit of work, it truly tastes like the real thing. Honestly, we were all shocked and my kids say they like it even better than the restaurant version.

It would be perfect for potlucks or summer gatherings. It’s so good with some smoked barbecue or grilled burgers. 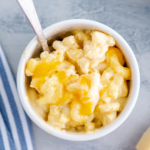