I’m sharing all my favorite Colorado Springs eats with you guys today. Donuts, ice cream, burgers and pizza abound because vacation calories don’t count. Keep reading for the must eats and one fun experience restaurant in Colorado Springs.

When I travel, I sometimes research where we’re going to eat as much as I research what we’re going to do. Is that embarrassing to admit? I seriously have Yelp, Trip Advisor and Flavortown USA on the ready at all times while on vacation. Or a handy google doc with all the must try places in order of importance. OCD much? So you understand that vacation food is important. But sometimes on short trips or ones that we’re trying to be a little more relaxed about (this is funny if you know me because relax I do not) we just pull up Yelp when we’re hungry and hit one of the most popular spots or search by area and type of food to find what’s best. That’s what we did on this trip. 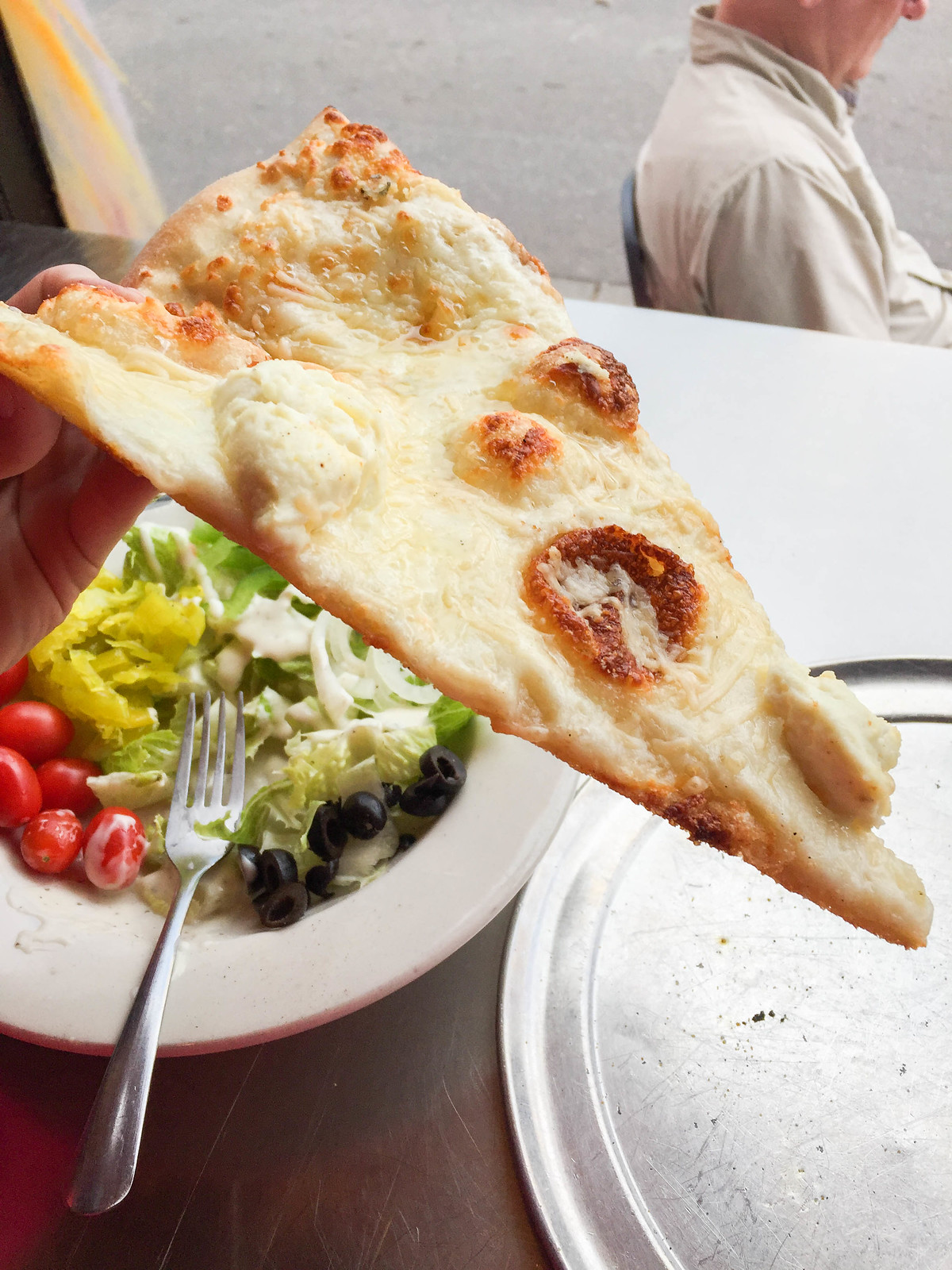 When we visited Colorado Springs last year we happened across this Ruffrano’s Hell’s Kitchen Pizza when we were hungry and wandering around Manitou Springs before we went to the top of Pike’s Peak. It small and unassuming but the best places usually are. You can order pizza by the slice with a salad or garlic knots or whole pizzas. I was a little worried since the pizza was already baked and then reheated in the pizza oven but as soon as I took a bite, my worries disappeared. We made sure to make a second trip before coming home last year. So, needless to say, this place was at the top of our food list when we returned this month. We once again hit it up before heading up Pike’s Peak and it was just as delicious as I remembered.

My favorite variety is the 4 Cheese White pizza which is covered in mozzarella, provolone, parmesan and dollops of ricotta. The ricotta is the creamiest I have ever had so I have to assume they make it in house. It’s not so loaded down with cheese that it’s overpowering but has enough to make it insanely delicious. The crust is super thin and gets crispy blackened spots on the bottom while still retaining that desired chew. It’s just everything pizza should be. Joel is a fan of the meat lovers and Noah digs the macaroni and cheese. I’ve enjoyed every variety I’ve tried but the white pizza is hands down best in my book. Our next meal was at The Airplane Restaurant. This is a place I came across during my “research” and thought it would be fun to take Noah to if we were in the area during our activities. Well, when we pulled up to our hotel at 1 in the morning we discovered it was basically in the parking lot. Destiny. I went back and forth over whether I should share this with you because we weren’t impressed with the food but it was a really neat experience for Noah to sit in an airplane and eat dinner. They had the cockpit open so we could pretend we were the pilot and play with all the switches while our food was prepared. So in the end, I thought I would tell you about it since it was a fun option for kids and made for a more pleasant dining experience having something to do while waiting.

All of the fun stuff being said, I ordered the Chicken Florentine pasta and it was kind of a gloopy, oversauced mess. I wouldn’t order it again. Joel had the Guacamole Burger and he thought it was good but not great. I have to admit I liked Noah’s kids meal the best, fried shrimp. They were light, crispy and well cooked. Would I go again now that we’ve had the experience? No, but I’m glad that he got to check it out. 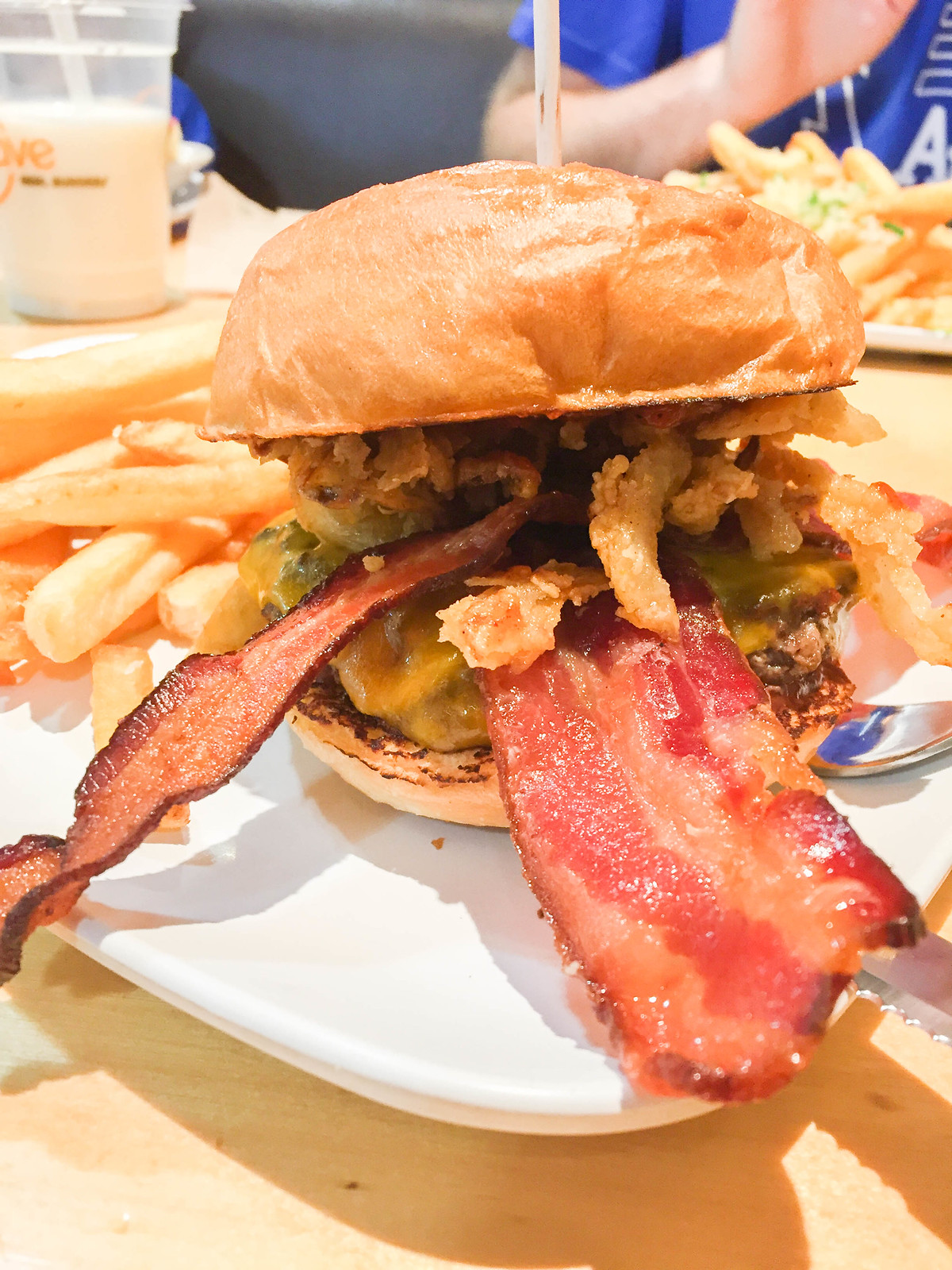 Before attending the Air Force v. Navy game, we stopped by Crave Real Burgers for lunch after searching for the best burgers in Colorado Springs. Yelp was right. There were so many amazing, deliciously unique burgers to choose from (almost overwhelmingly so). They also had an amazing menu of milkshake options that sounded divine. 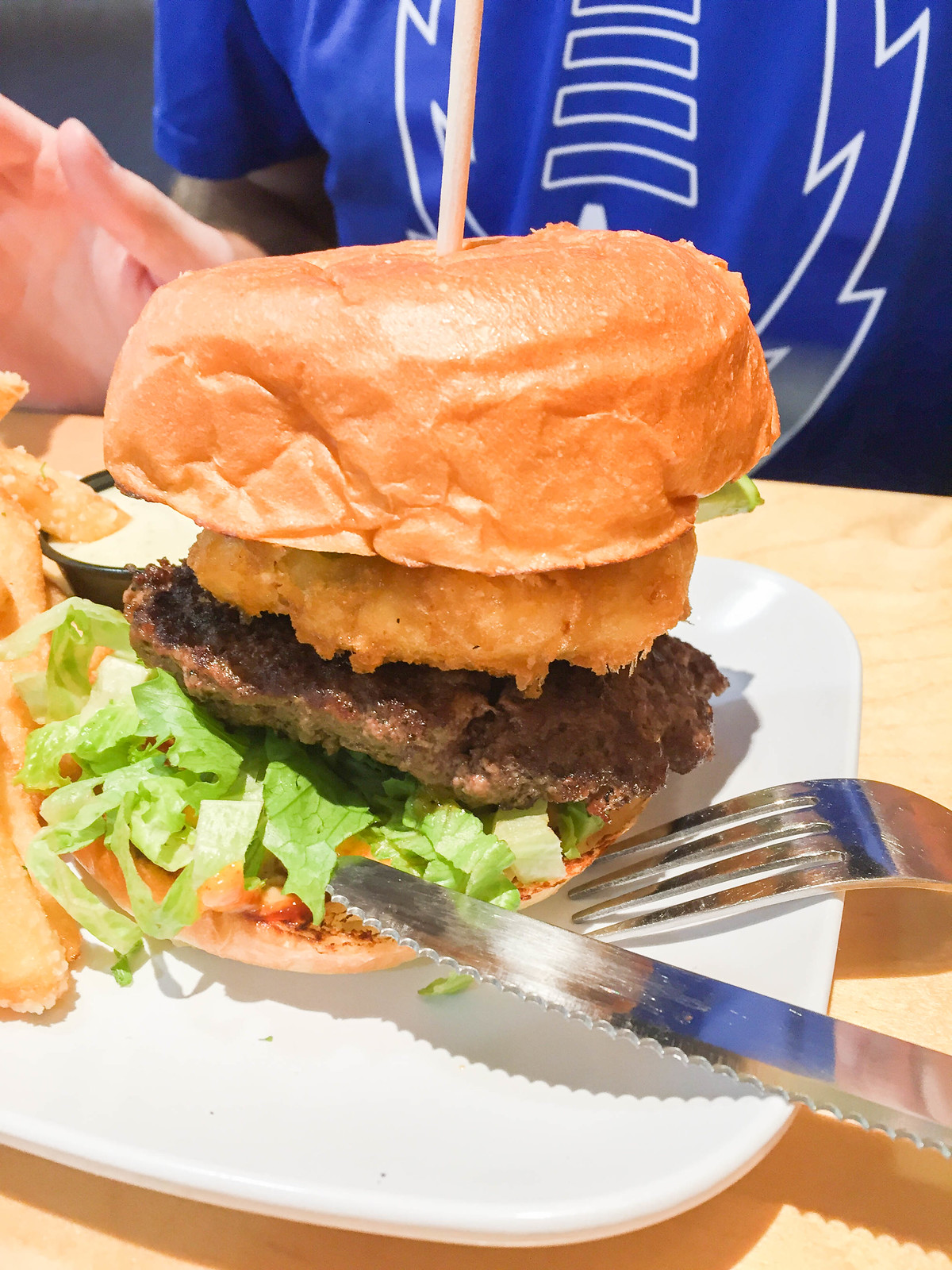 I ended up going with the Krusty, one of their top 5 most popular burgers, which was a burger patty coated in crushed peppercorns grilled to your preference then topped with bacon, onion straws and BBQ sauce. I mean, with a line up like that you know it’s going to be good. I put pepper on everything so the peppercorns totally put it over the top for me.

Joel had the Popper which is another top 5 and it was amazingly good too. It was loaded with beer battered cream cheese and jalapeños, lettuce, tomato, onion, chipotle mayo and avocado. Seriously. They even have options that use grilled cheeses or donuts as buns. This is a definite place to stop if you are visiting and love creative, wacky burgers. They have classics too if you aren’t so adventurous. 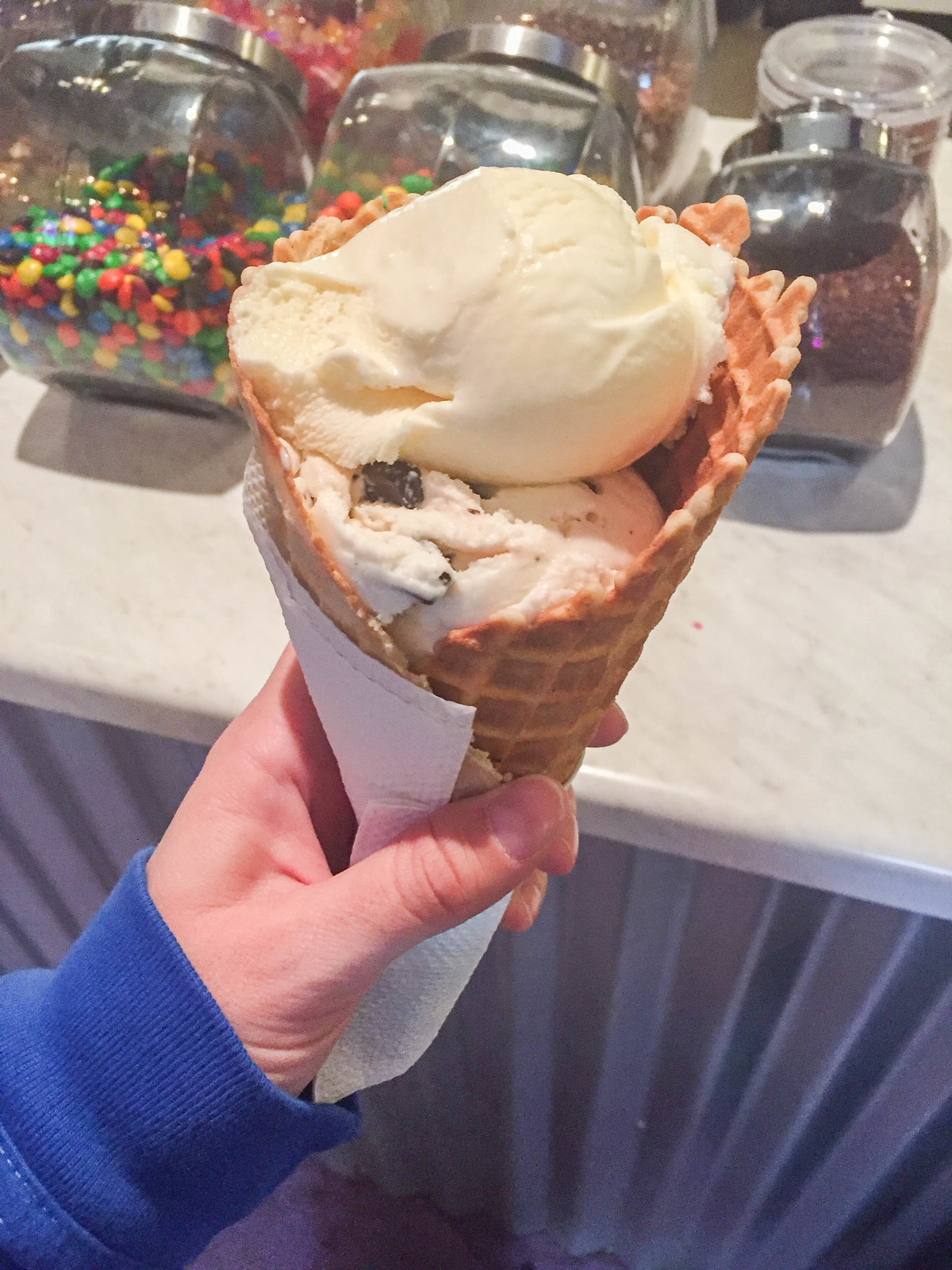 We had those giant burgers around 1:00 for lunch so when dinnertime rolled around we weren’t very hungry so I made the crazy suggestion of having ice cream for dinner. This isn’t something we would ever do at home so I thought it would be a fun this to do on vacation. But my little rule follower was very worried about the whole idea and it took some convincing and prodding to get him to go for it. Once we were in the car and on the way, he got really excited about breaking the rules and we started imagining all the flavors we could try.

Josh and John’s Naturally Homemade Ice Creams uses the best possible natural ingredients and they slow churn their ice cream in old school rock salt and ice freezers for an hour. You can absolutely taste the difference from the churning process. All the flavors we tried were so incredibly rich, silky and creamy. And they make their own waffle cones! We didn’t get to see the process but Noah was really excited to check out the equipment.

I went with a scoop of my favorite classic, mint chocolate chip and also a scoop of yellow cake. In a waffle cone, duh. The yellow cake tasted just like cake in ice cream form and the mint chocolate chip was the best I’ve ever had. Noah chose Rocky Mountain Road with M&M’s on top and downed it in just a few minutes then helped me finish mine. I’m not a fan of chocolate ice cream so I didn’t give that one a try but he loved it. Joel ordered Mocha Java Jolt and it totally delivered. Coffee ice cream with chocolate covered espresso beans was totally delicious.

They have two locations and a traveling scoop bus in the Colorado Springs area. You can check the bus schedule on their website. 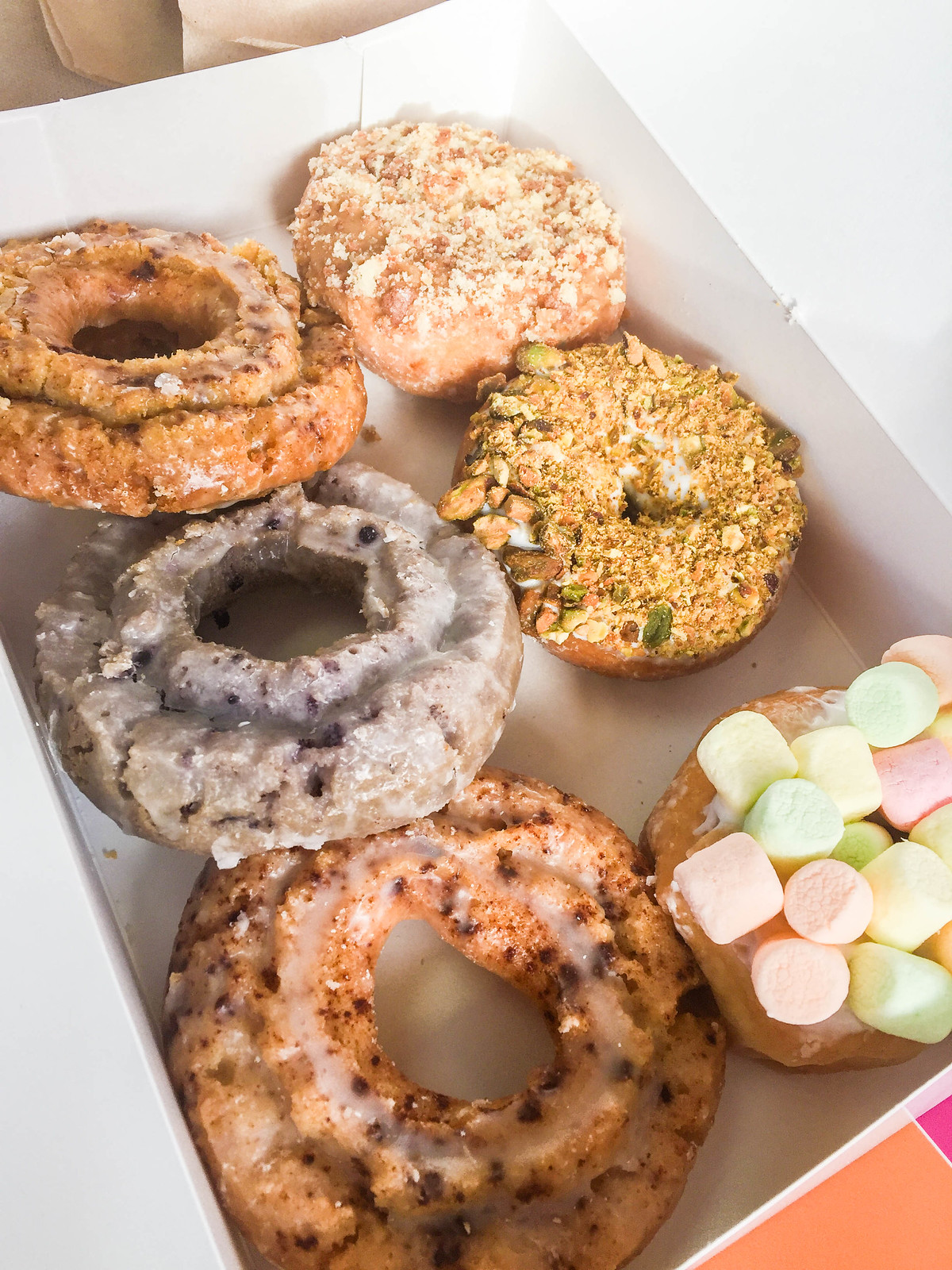 Amy’s Donuts was our last meal before heading home. There were about 50 different donuts so the decision was a bit overwhelming but we managed to decide on 6 that we wanted to try. Joel and I aren’t big on the crazy ones with cereal or cookies on top so we stayed pretty classic but were still able to try a few that our that I had never seen before at our local donut shops. 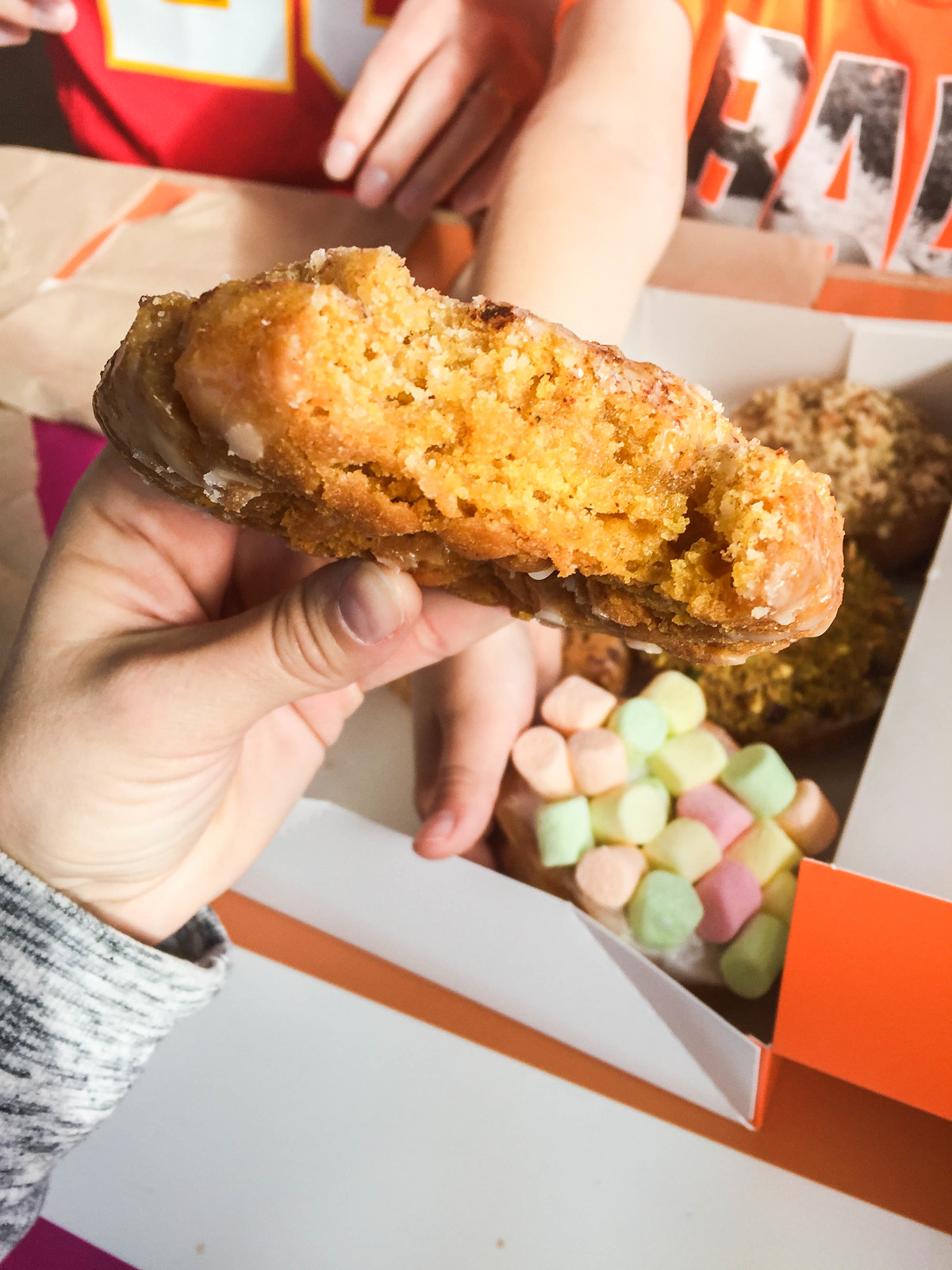 My first and favorite choice was the pumpkin old-fashioned. It was dense and moist and perfectly pumpkin spicy. I also tried a pistachio cake donut which had a simple white glaze and crushed pistachios on top. The cake donut was dense yet fluffy. The only cake donuts that I’ve had that were better were these in Salt Lake City last year. Joel is a huge fan of old-fashioned donuts so he went with the maple and cinnamon versions. And good ‘ole Noah jumped on the sugar train with the marshmallow donut. They were so tasty and well worth the long line.

That’s all folks. I hope you guys enjoy reading these as much as I love writing them up. So if anybody wants to pay me to plan their trip then take me on it to eat all the things, I’m totally available.