I’m so excited to share some of our favorite San Diego eats from our recent trip. When we are planning a trip, we usually put about the same time into researching restaurants as we do activities. We’ve found that with the kids in tow it’s harder to hit the places on our list because when they are hungry, they are hungry and we aren’t always in the right location and I don’t know about you but driving for a half hour with a hungry, screaming toddler just isn’t going to happen. So this time around, we took to Yelp a lot to find the top rated places in the area we were located at the time of hunger-pocalypse. We were able to hit a few spots we had scouted out or were told about ahead of time so all the planning didn’t go to waste.

All these photos are from my iPhone so they aren’t the greatest quality but I think they are still pretty drool worthy. If you try out any of these places or have any must try places in the San Diego area, let me know in the comments section at the end of the post! Without further ado, read on for the delicious food that kept me full (and my pants on the tighter side) in San Diego. 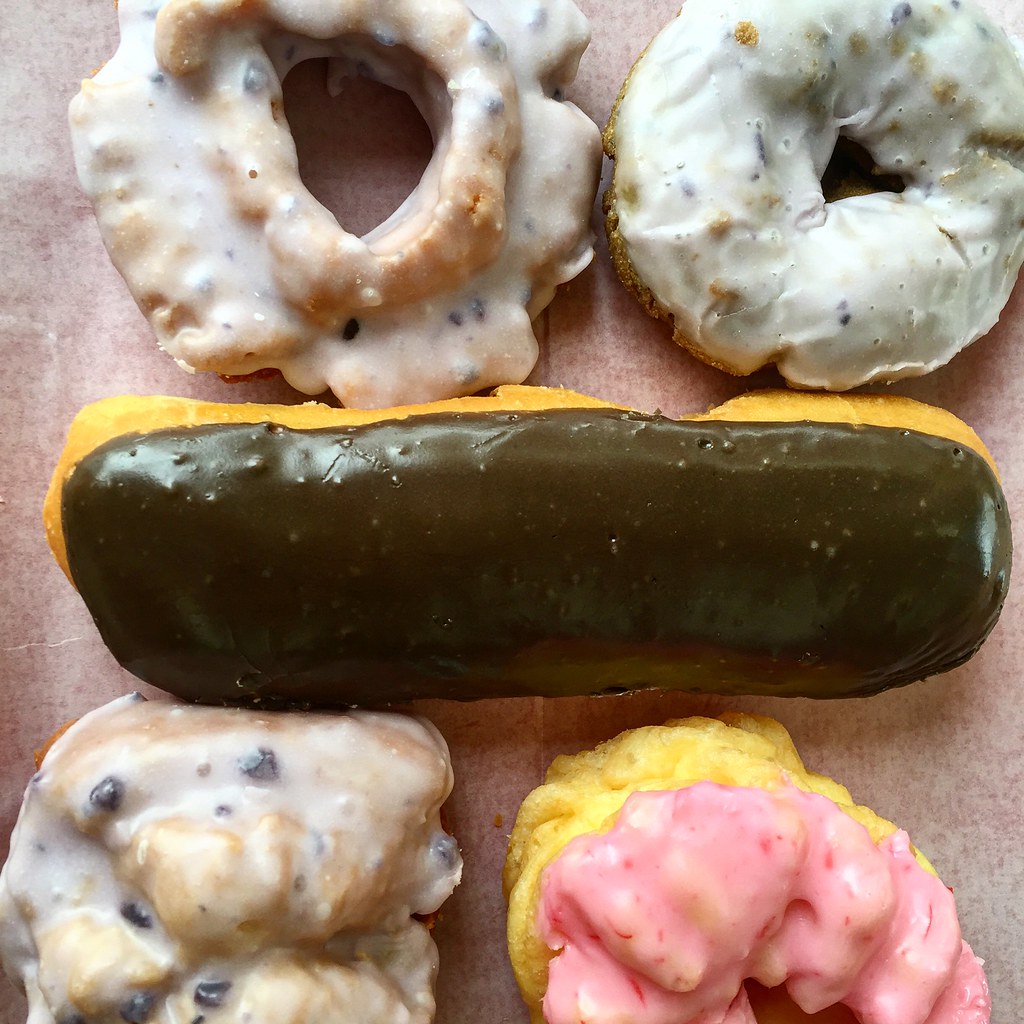 We tried Christy’s Donuts our first morning of the trip. I specifically researched donut places in town since Joel and the kids are donut fiends and I knew there would be lots of fun, unique places in the city. This place was only a few blocks from the house we were renting so it was super convenient and it was highly rated. They had pretty standard, classic choices (especially compared to the other donut shop I’ll tell you about later) but they were done perfectly. I went with a buttermilk donut with blueberry glaze and I did not regret my choice. The donut was dense and moist (sorry for the use of that word but there isn’t really any other way to describe it) and the glaze was sweet with actual blueberries in it. 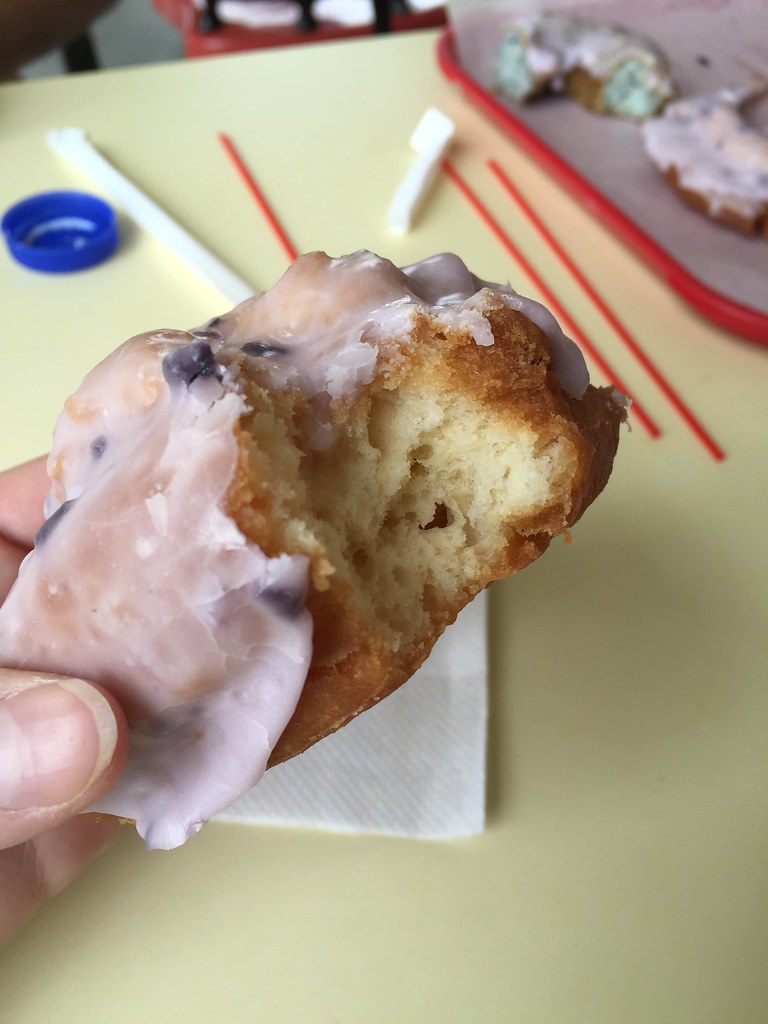 My favorite part of the shop was the different glazes they offered on all the donuts. Most donuts, whether it was an old-fashioned, a crueller, buttermilk or cake had the option of maple, blueberry, strawberry, chocolate or vanilla glaze. I like options.

We stopped by Bubba’s Smokehouse BBQ after a morning at the beach for something quick and kid friendly. We were all tired and knew having to wait and be served would not end well for anyone involved. The menu for this cute little spot was huge and it was quite hard to decide. I kept going between this salad and the Bubba’s Bacon Burger but ultimately went with the BBQ Cobb Salad since it was the beginning of our trip and I knew I was going to be making some unhealthy choices in my future. Joel grew up in Kansas City and we go back often and have barbecue so we’re pretty biased. Bubba’s wasn’t as amazing as our favorite KC spot but it definitely held its own. 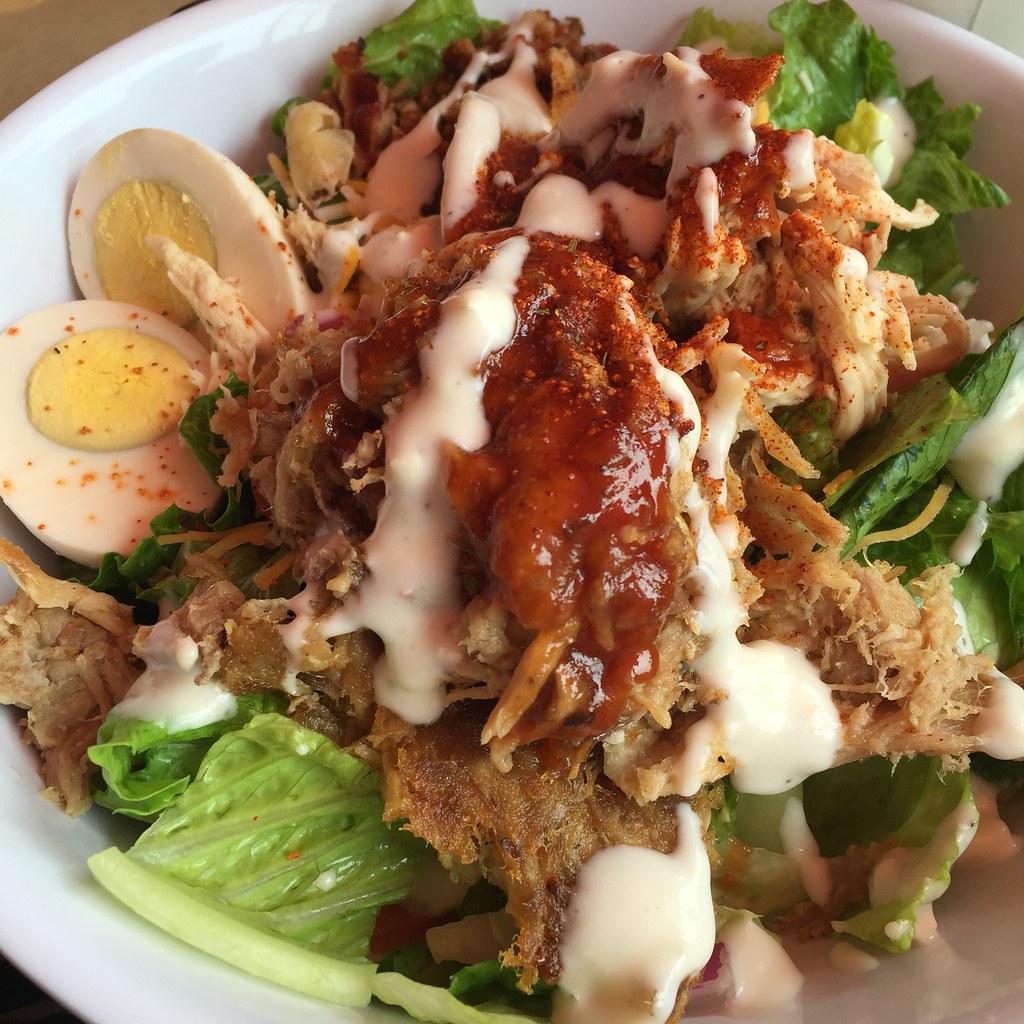 My BBQ Cobb Salad was loaded with 3 different smoked meats, pulled chicken, pulled pork and bacon along with the classic tomato, hard-boiled egg, onion and bleu cheese dressing. I added just a little of the bleu cheese and their sweet BBQ which was a delicious combination. All the protein on the salad kept me full until dinner time. I love a big salad with lots of variety so this definitely hit the spot. 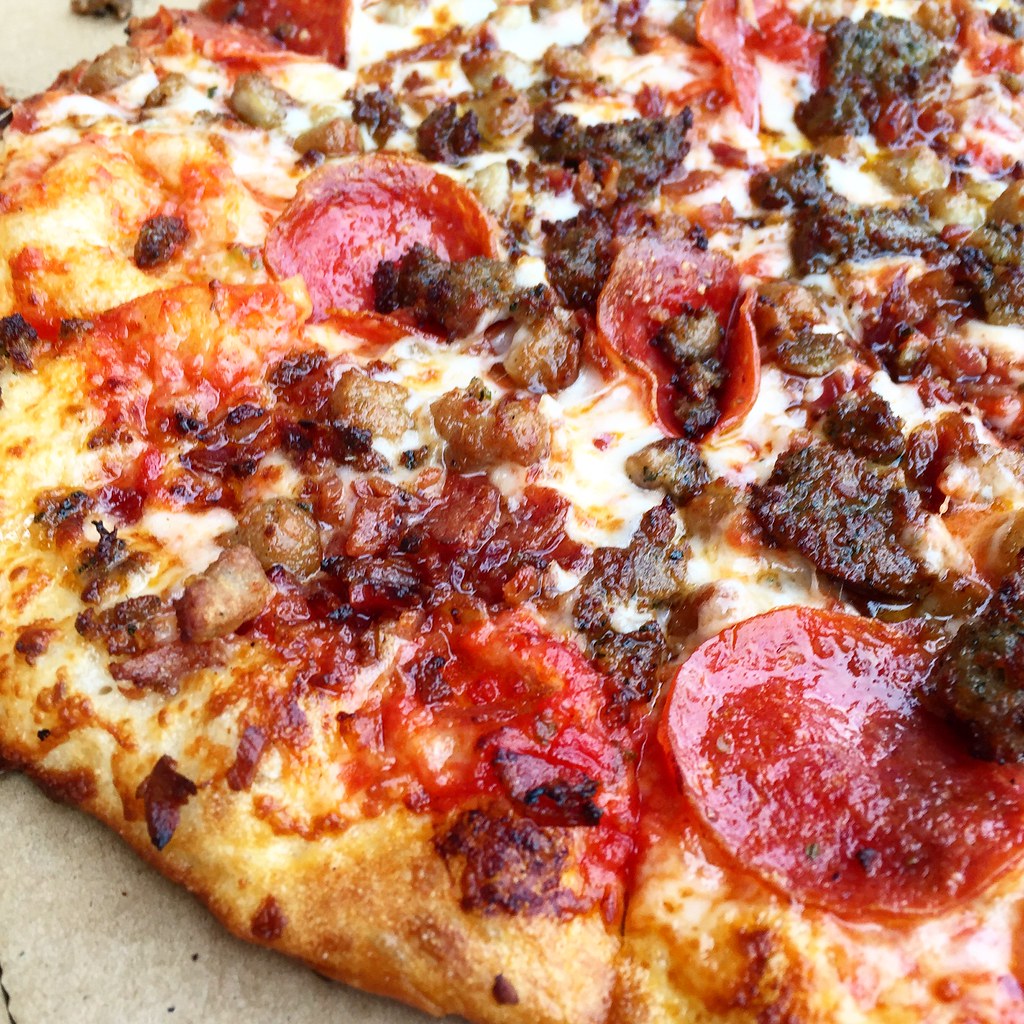 We let Noah choose what to have for dinner after the wedding rehearsal and just like his daddy, his answer is always pizza. So back to Yelp we went to find the top rated pizza in Oceanside. We found Zigzag Pizza which had some delicious combinations and tons of local beers and vintage sodas plus it was right by the beach. It was a no-brainer. Their pizzas and salads are named after classic rock songs like the Hotel California and Slow Ride. How fun is that?

We decided to create our own and keep it simple so that everybody would eat it without complaint. The kids don’t like anything weird so we went with the classic pepperoni and sausage. The crust was thin but still chewy and got a little charred on the bottom in all the right ways. 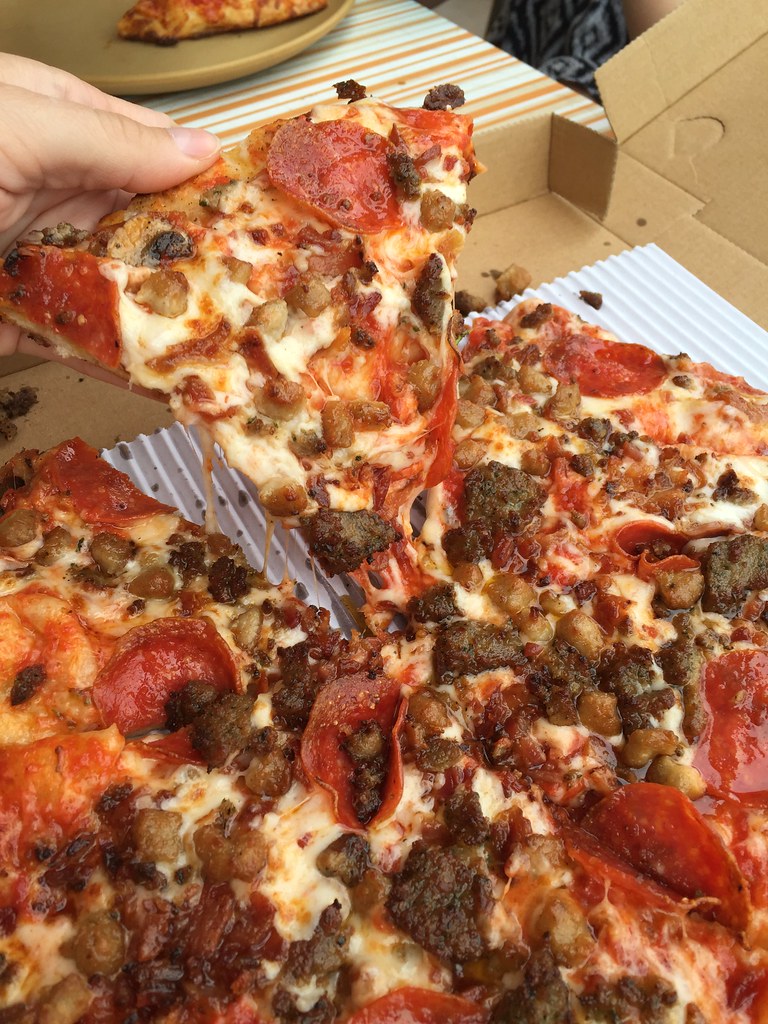 And I mean, look at that cheese pull. It was so stringy and delicious. I would consider our family pizza aficionados and we all agree that it was in our pizza top 10.

We were downtown at the children’s museum when hunger struck so we went on a stroll to find some delicious Mexican food. The place we had scoped out was closed that day so we just wandered around a bit, looking at menus until we found a place that sounded good. We came across Funky Garcia’s Mexican Eatery and Bar and they happened to be serving brunch which made us all happy so we decided to give it a try.

The kids were excited to have pancakes and Joel and I were pumped to have some authentic Mexican food. I went with the tortilla scramble and it was one of the best breakfasts I’ve ever had. I chose to have corn tortillas along with it (the other option was toast) and made breakfast tacos out of the scramble and homemade refried beans. OMG, breakfast nirvana. 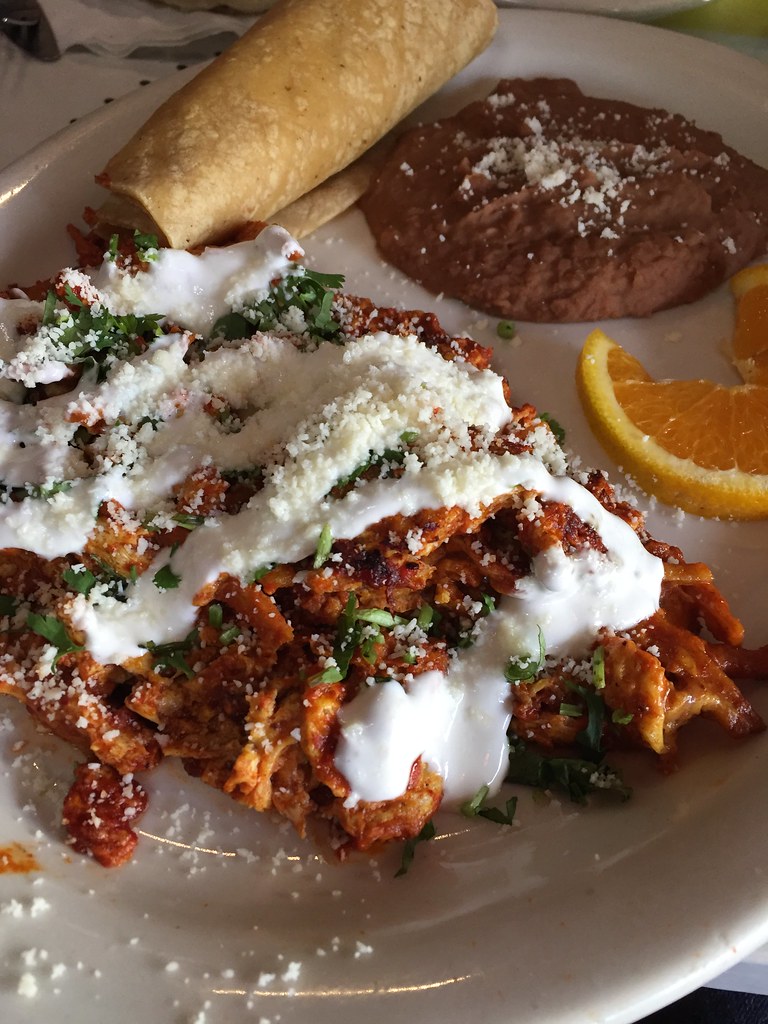 I’m definitely more of a savory person at breakfast time, or really any time, so the creamy scrambled eggs, spicy chorizo, salty cheese and crunchy tortilla chips were pretty much perfection. I loved the crunch and texture the tortilla strips provided in the scramble. I am definitely planning on recreating this one at home.

Joel chose the chorizo and eggs which was also really yummy but I preferred mine hands down. So good.

This is another must stop in the Point Loma area of San Diego. Slater’s 50/50 was a recommendation from the family sitting with us at the wedding reception. They asked us “do you like burgers?” um yes. “Do you like bacon?” duh. I didn’t really respond like that but that’s what I was thinking in my mind. They told us Slater’s 50/50 was their favorite restaurant in San Diego because their burgers are made with 50% ground beef and 50% ground bacon. I think my jaw might have hit the floor and I immediately whipped out my phone to write it down.

I ordered the B’ B’ B’ Bacon Burger which features a 50/50 patty, thick cut bacon, bacon American cheese, sunny side up egg and bacon thousand island dressing (say what?) all on a pretzel bun. You guys, I don’t even know what to say. It.Was.Amazing. The patty tasted so bacon-y delicious. And that bacon thousand island dressing though. The egg provided even more richness. It was pretty indulgent and heavy but in the best way possible. Definitely not something I would eat often but it was an excellent treat yo self meal. 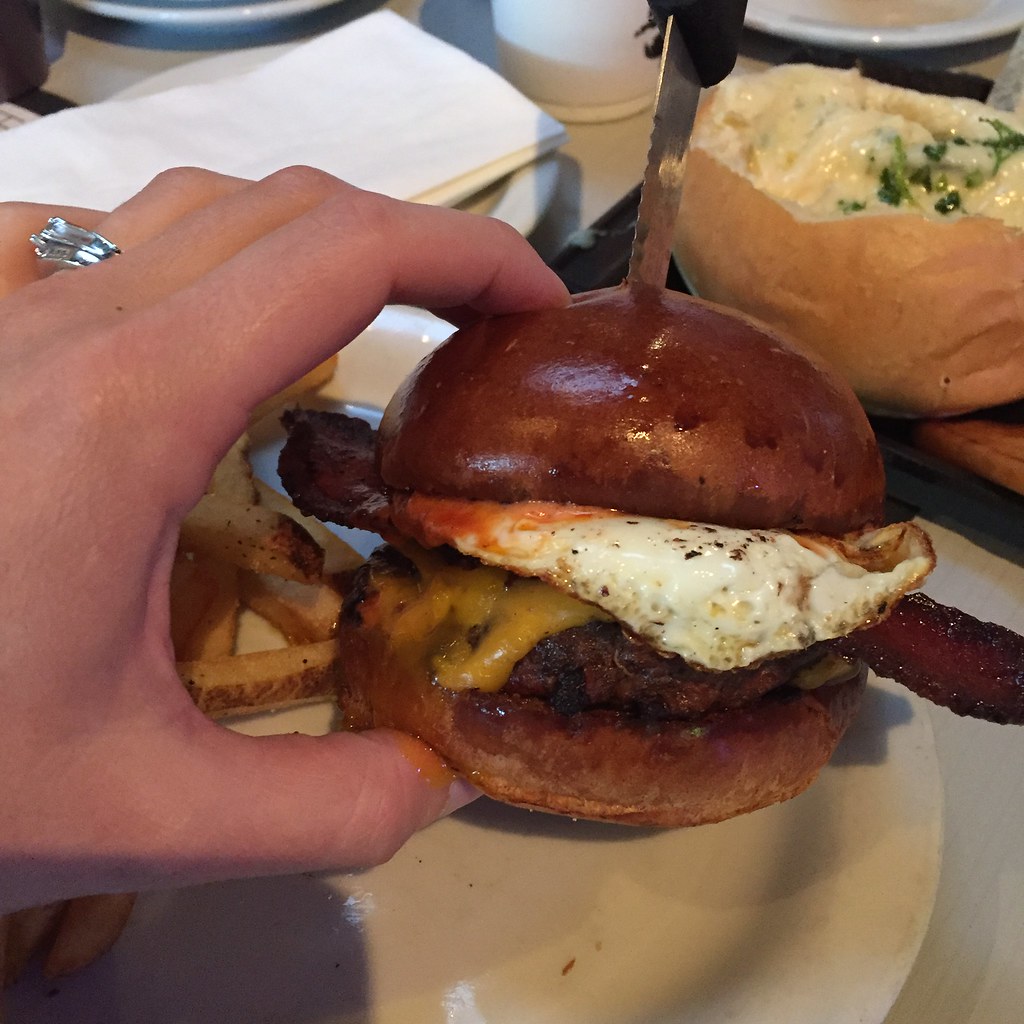 Our new favorite friends in San Diego also raved about their appetizers so we knew we had to try something. We decided on the Vampire Dip which included 3 cheese, tons of garlic and artichokes with homemade pita chips and veggies on the side. Look at the cheese pull. Just look at it!! It was the best artichoke dip I’ve ever had. 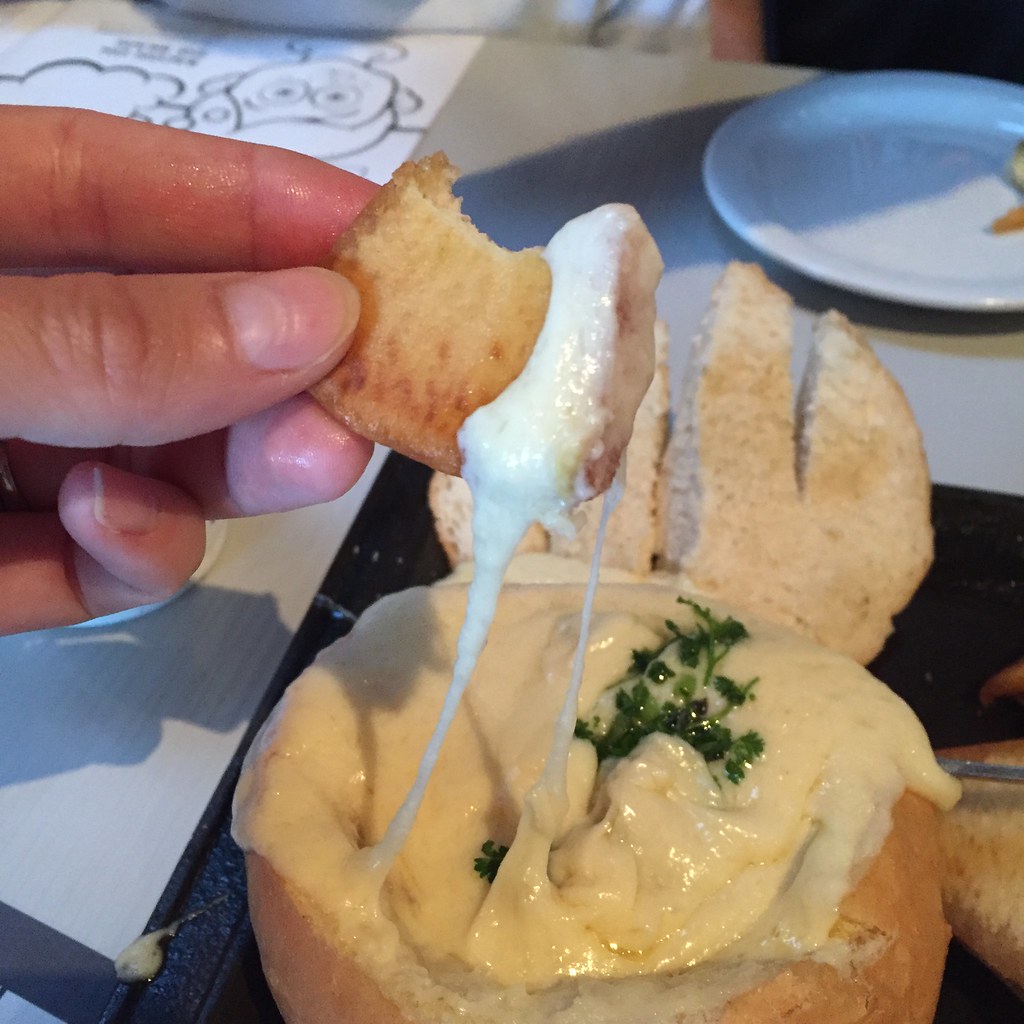 They have 6 California locations so if you are in a different area of the state check their site to see if there is one near you.

This is another place we found when we were planning and knew it was a must stop. The donuts at Donut Bar are out of control and many are as big as your face literally. See. 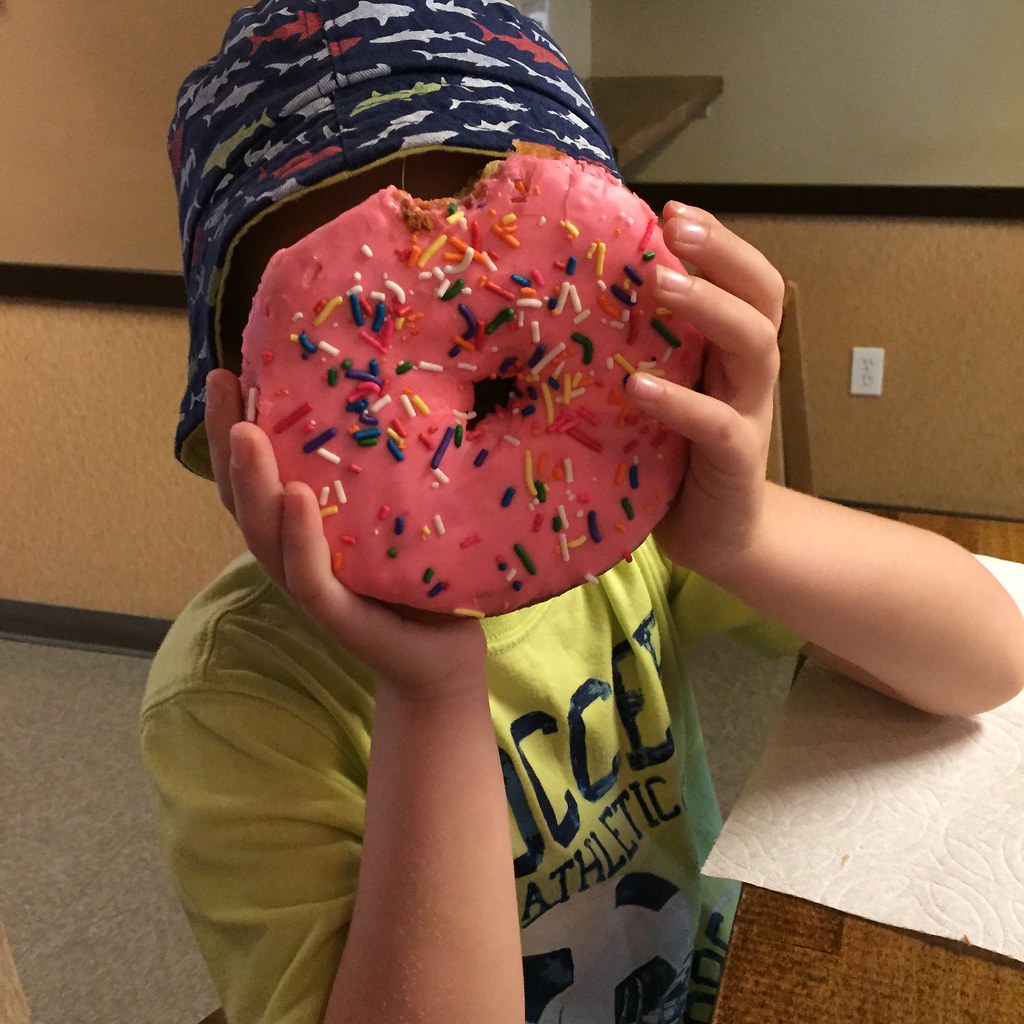 We were kind of overwhelmed by all the fun, creative choices Donut Bar had to offer. There was s’mores, salted caramel, coconut dream, blueberry cheesecake and so many more. We tried coconut dream, homer, old-fashioned, classic sprinkles and strawberry shortcake or crumble or something like that. They were all incredible but the coconut was hands down my favorite. They were yeasty and light and delicious. We also had their nitro cold brew iced coffee. 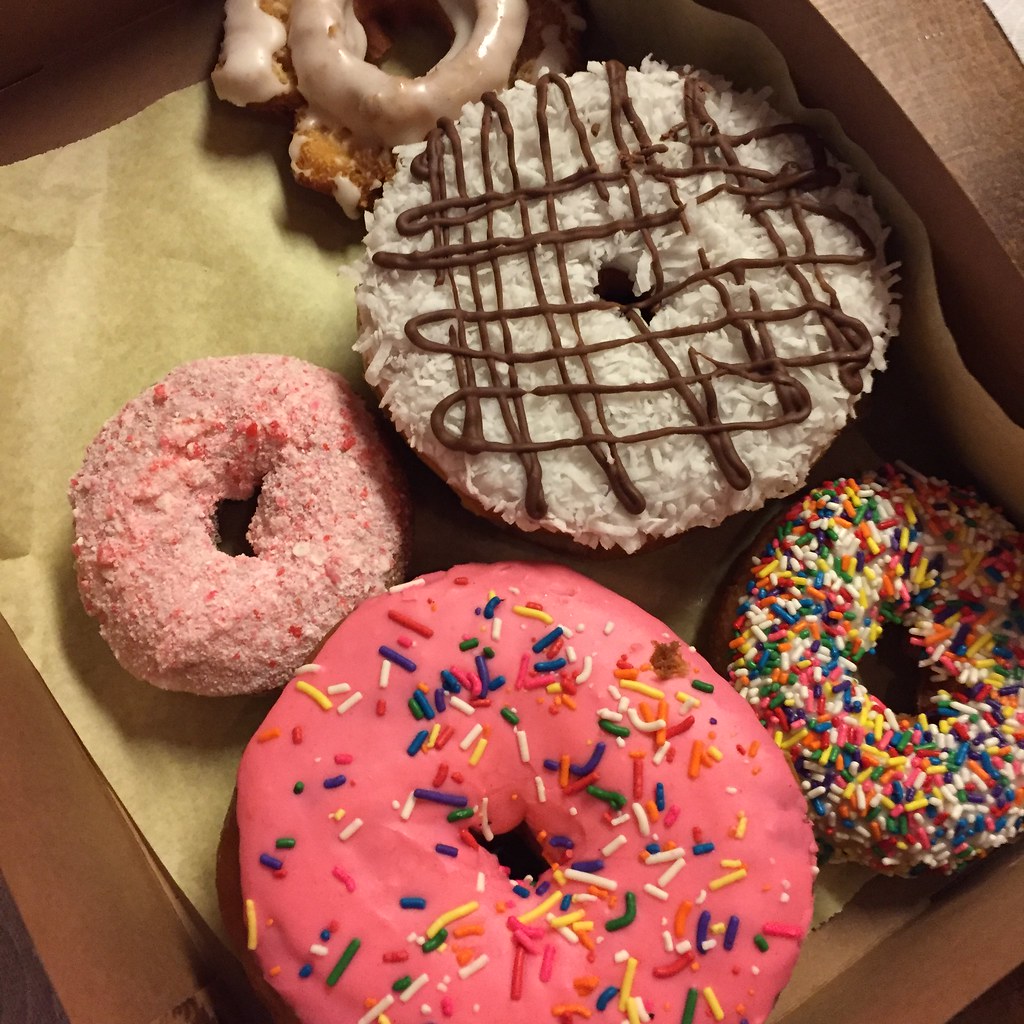 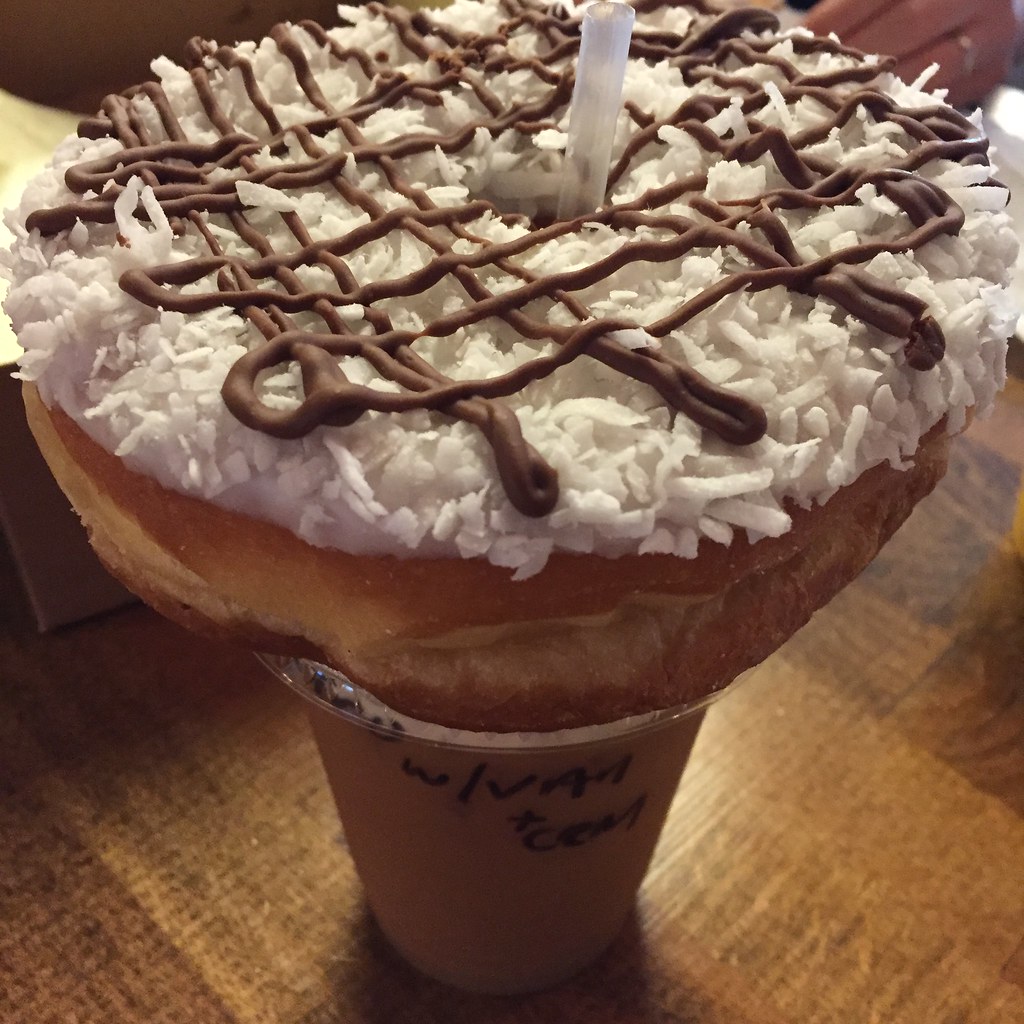 We spent our last afternoon at Mission Beach so we searched the area for a delicious, authentic taco shop for our last meal. Carne asada tacos and carne asada fries were an absolute requirement so when we saw them both on La Playa Taco Shop’s menu we knew it would be a winner. The carne asada was tender and juicy. I also tried a carnitas taco which was tender and crispy on the edges and I preferred it over the carne asada. Both were topped with pico de gallo and cilantro. Super authentic and delicious. The corn tortillas were so soft and the refried beans were creamy. 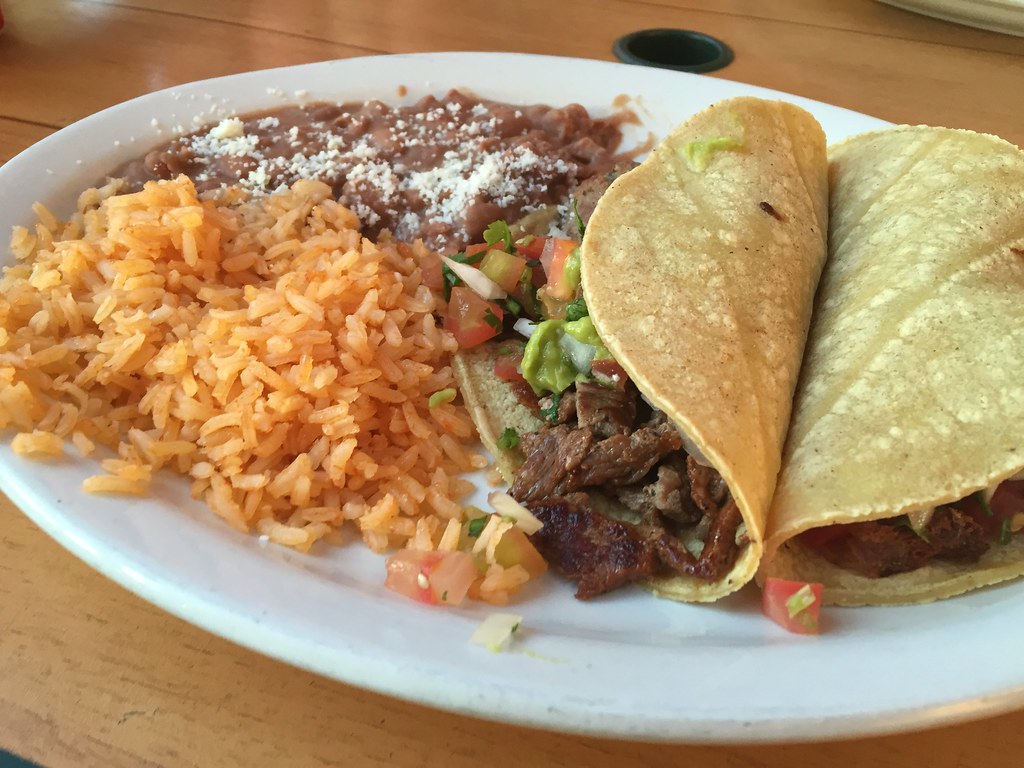 Onto the carne asada fries. This dish consists of fries topped with carne asada, cheese, sour cream, guacamole and pico de gallo. They were pretty darn delicious but I have to admit I’ve had better here. That’s not to say you shouldn’t try them but I wasn’t totally blown away by them. 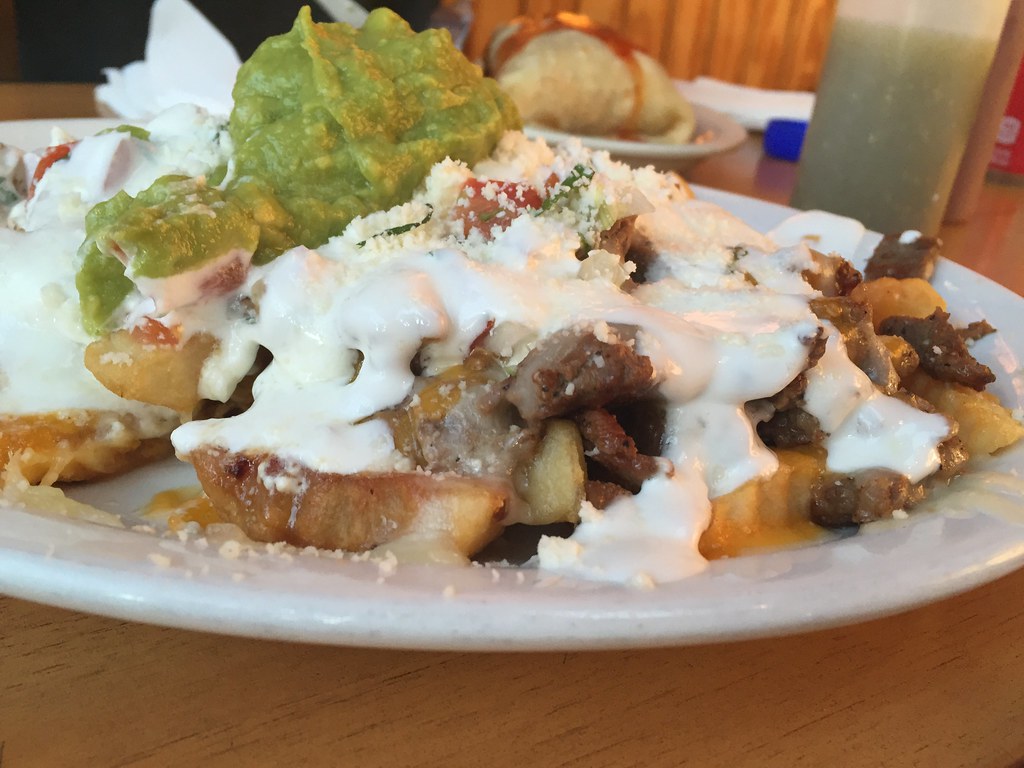 So there you have it friends. All the delicious San Diego eats we devoured. If you have any favorites to add, leave them below.