I’m reporting that the mission was a success. Any of you that know me well know this a complete feat. Noah has never liked meat of any sort except for deli meat. No chicken, burgers, pork, nothing. He does like seafood so there’s that at least. But I don’t think I’ve ever met a kid that doesn’t like chicken nuggets. I didn’t think they existed. I love chicken so much that I could eat it every day and give up all other meats. Although I would miss a good burger. And bacon. Actually, let’s not think about that.

Last week I had a package of chicken and no ideas what to make with it and dinner was quickly approaching. I was scanning the pantry for ideas and thought I would just do simple chicken nuggets with breadcrumbs, but then I remember I used them all for this deliciousness. Womp womp. I figured I could find something else to coat it with instead, like cornflakes. The only cereal we had was raisin bran and fruity cherrios, no thanks. Then I saw the graham crackers that always grace our pantry. Noah would live on graham crackers spread with peanut butter if I let him. I figured this was my best chance to get him to eat the dang chicken for once. 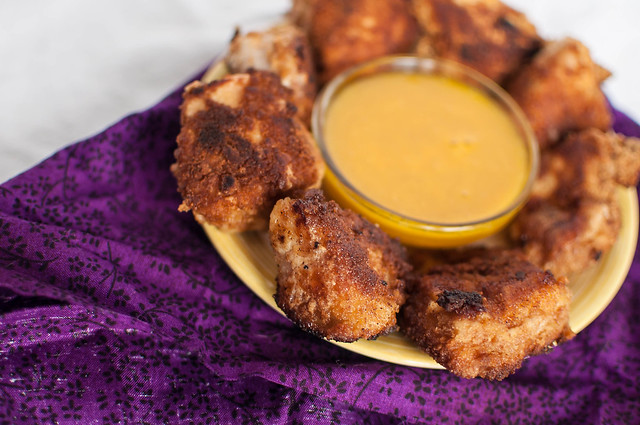 He saw it and immediately said yuck but the rule in our house is you have to try it. So he did and he said “hey these are actually pretty good, nom nom nom.” And then proceeded to eat 3. That’s a total success in my book and had us all dancing and cheering at the table (because crazy encouragement doesn’t hurt).

The graham crackers lend a definite sweetness to the chicken but it’s not overpowering. The outside gets crispy like a traditional chicken nuggets and they stay moist. They were perfection dipped in honey mustard. An added bonus is they take less than 30 minutes from start to finish. Winner winner chicken dinner. See what I did there? 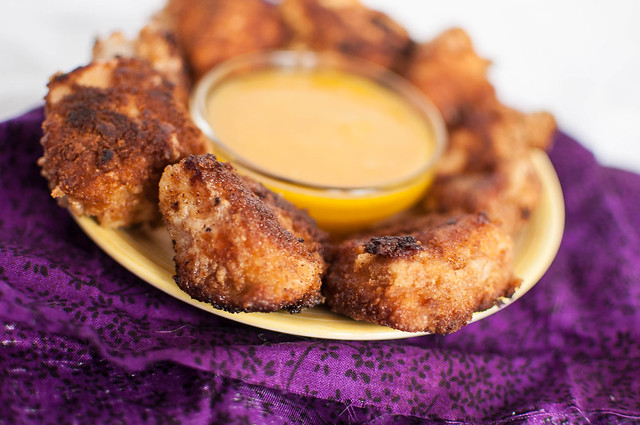 2. Coat chicken in flour, then dip in egg then roll in graham cracker crumbs. Place on a plate until all chicken in coated.

3. Put olive oil in pan and cook chicken in a single layer. Cook for 2-3 minutes, until golden. Flip and cook another 2-3 minutes until golden and cooked through. Serve with your favorite dipping sauce, honey mustard or BBQ are especially delish.